LOOK WHAT JESUS DID!
#1 Prayer request followed by #2 Praise REPORT!

1.From Michelle
(December 24)
“His name is Benny … This time it’s one of mine… Benny has a blood disease…he has been transferred to Cooks Childrens hospital…for a Blood Transfusion…this will be his 4th or 5th…they came to see me for Christmas…and this is his reward… His name is Benny he’s 9…and very scared…I’m looking for a miracle…so i came to where i know people pray!!!
Jesus in your name and by your stripes we are healed…I’m reaching for the hem of your Garment…and believing…in miracles…thank y’all!!!”

Guess what? NO BLOOD TRANSFUSION for my BENNY!!!! He was released…telling us to watch him… We had an AMAZING CHRISTMAS…I CAN’T QUIT CRYING!!! I’M SO HUMBLED AND GRATEFUL…thank y’all for your prayers!!! 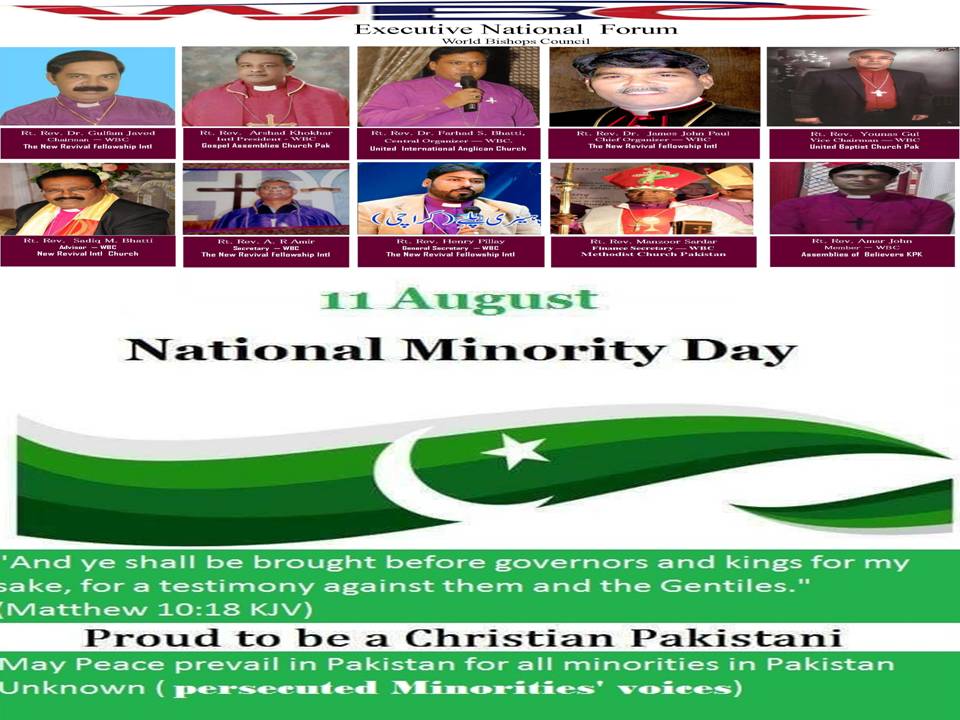 Please pray that The Lord blesses Brother Henry Bhatti Farhad, The World Bishops Council and all of the persecuted Church around the world.

In Christ, Dear Heavenly Father God Almighty, The Most High God of Majesty, the creator of Heaven and earth, the Elohim, Yahweh Yirah,   El Shaddi, the God of Abraham , Isaac, Jacob, God of Israel. We humbly come before your throne of Grace and mercy in the mighty Name of Jesus Christ – Yeshua for the peace of Pakistan and the solution for persecuted Pakistani Christian in other countries who are seeking Asylum & refugee through UNHCR.

Merciful God of Host, They may live in other countries but their hearts are still praying for the peace of Pakistan’ minorities. They always are crying in prayer to you God for the betterment in Pakistan for all human being. There are thousands of thousands established Pakistani Christians who are settled in Europe, USA & UK all over world but they are still crying for the humanity and minorities’ peace in Pakistan. May peace prevail in Pakistan, we ask blessing for peace as ambassador of Peace.

Merciful Lord of Host, Jesus, you are prince of peace; you are wonderful mediator between human and God to redeem grieved humanity.  We pray for the peace of minorities in Pakistan, Especially Christian minority that had been brutally persecuted in Pakistan for last 70 years even churches, Christian colonies were being burnt and alive burning had been happened in Pakistan. Now thousands of thousand Christian are seeking Asylum & Refugee in different countries of world through UNHCR due to discrimination and persecution in helplessness and hopelessness.

Merciful Lord of Lords, King of Kings, some political and religious authorities had  manipulated the rights of minorities to higher Authorities of UNHCR to consider Pakistani Christian Asylum cases as fake and due to selection system not election. Even so many political & religious leaders already took political Asylum in other counties due to persecution & discrimination during ruling time or after ruling over nations. Merciful Lord of Host, but due to manipulation, there are so many genuine persecuted Christian’ cases had been refused. Due to long process of UNHCR, there are so many genuine Christian’ hope had lost their confidence in UNHCR after so many year’ delay in results during processing of interviews and repeated questions, there is no security of children proper educations, they can not afford expensive education of international school due to no jobs and lack of resources. They did not find future of children and families in seeking asylum due to helplessness and brutal system.

Merciful Lord of Host, majority of victims of Johnabad, Lahore’ Pakistani Christians are still in the prison, they are still not justified by the courts of Pakistan after so many years.  So many lower classes Christians and painful heart Christian are still in fear of arresting, facing persecution & discrimination. Even higher classes are enjoying their rights, May God bless all classes of Christian in Pakistan to be blessed and peaceful. Because higher classes can go any where and any time but lower classes may have no ticket and visas to move any where. Father God, we ask your justice for all classes – lower and higher.

As all minorities celebrate 11th August for minority day and 14th August as Independence Day with depth of their hearts and minds, they believe in same languages, culture, they feel confidence in their homeland – Pakistan. But they can not return to Pakistan in fear and with less confidence in Government and system of Pakistan where false cases had been formed over helpless Pakistani Christian.

Father God, So many Christian had been tired due to hardship of different cultures, languages and lack of funds, lack of jobs, and uncertainty about cases through UNHCR. We ask your justice for daily basic needs of Pakistani Christian Asylum seekers who are in those countries who had been signed UN charter as signatory to protect Asylum seekers like Thailand and  Malaysia, Pakistani Christian are suffering so much above imagination.

Merciful Lord of Host, we ask your justice and mercy for helpless and hopeless people who are suffering in different countries. We ask in mighty name of Jesus Christ. Father God in Heavens, having faith in Christ, we all are spiritually citizens of your divine kingdom of heavens as written in your Holy words. We ask restoration for rights of persecuted Christian in Pakistan and in different parts of world.

We ask your mercy, grace and justice in mighty Name of Jesus Christ. Amen.

—From Brother and Bishop Henry Bhatti Farhad of Pakistan.

https://www.youtube.com/watch?v=Dfr-M… https://youtu.be/hckEV1h4vWk I know we all fall short but I also know that when we do fall short we must fall on our knees and not rebel. #StillStanding #SeekDeliverance #JesusMatters

The Holy Spirit is asking others to be in FERVENT prayer for the protection of the ones that are in dangerous areas.

Concerning the viruses and outbreaks that the whole world seems to be experiencing all at once, Minister Paul heard The Spirit of The Lord saying, “This is by design. This is by design. This is not no coincidence for the season you are in. Look around, look around, look around! May ye be found worthy as this world sickens, as judgement comes upon you! Look around, open, your eyes. Says The Spirit of The LORD. Turn to Me, turn to me in sackcloth and ashes, repentance. A repentant heart. While today is still called today in Jesus Name, In Jesus Name.”

Something’s coming your way and it’s not good. God is warning you!

He said The Holy Spirit said “outbreaks.”  This is going to produce OUTBREAKS!

Brother Paul says that things are not normal and not as they seem! Major things are coming upon the world! PRAY!

Click the image BELOW to Get a Copy of David Arthur’s Powerful Testimony in his book REFINED: Life Through Homosexuality, Transgenderism and Beyond

THIS IS A WAR

John 3:16 “For God so loved the world, that He gave His only begotten Son, that whosoever believeth in Him should not perish, but have everlasting life.” Help is only a prayer away. Remember, You are not over! Cry out to JESUS, the Son of God Almighty.

Order YOUR COPY of the latest life changing film by the Director of Detestable Thomas Dunn!

26 A new heart also will I give you, and a new spirit will I put within you: and I will take away the stony heart out of your flesh, and I will give you an heart of flesh.

27 And I will put my spirit within you, and cause you to walk in my statutes, and ye shall keep my judgments, and do them.

Father God, in the Name of Jesus, we lift up all babies, boys, girls, men and women who are involved or being used in the adult entertainment industry and sex slavery. Human trafficking. Satanic Ritual Abuse. We ask You to please infiltrate the enemies camp and remove spiritual hostages. Convict people that are going to porn sites, drag shows, strip clubs, night clubs and bars. Cancel all assignments and plans of ritual abuse to shatter the human soul for the purposes of the kingdom of darkness.  Set the captives free TONIGHT JESUS, so that they don’t have to spend another second in a CAGE whether literal or spiritual. Intervene, oh God, and expose the darkness. Put an end to this madness. In The Name of Jesus, Amen.

the Devil’s got a secret

For supernatural healing by The Power of The Holy Spirit, call Brother Reggie. Glory to God!

Thanks to JESUS! Isaiah 61:1-8 King James Version (KJV) 1 The Spirit of the Lord God is upon me; because the Lord hath anointed me to preach good tidings unto the meek; he hath sent me to bind up the brokenhearted, to proclaim liberty to the captives, and the opening of the prison to them that are bound; 2 To proclaim the acceptable year of the Lord, and the day of vengeance of our God; to comfort all that mourn; 3 To appoint unto them that mourn in Zion, to give unto them beauty for ashes, the oil of joy for mourning, the garment of praise for the spirit of heaviness; that they might be called trees of righteousness, the planting of the Lord, that he might be glorified. 4 And they shall build the old wastes, they shall raise up the former desolations, and they shall repair the waste cities, the desolations of many generations. 5 And strangers shall stand and feed your flocks, and the sons of the alien shall be your plowmen and your vinedressers. 6 But ye shall be named the Priests of the Lord: men shall call you the Ministers of our God: ye shall eat the riches of the Gentiles, and in their glory shall ye boast yourselves. 7 For your shame ye shall have double; and for confusion they shall rejoice in their portion: therefore in their land they shall possess the double: everlasting joy shall be unto them. 8 For I the Lord love judgment, I hate robbery for burnt offering; and I will direct their work in truth, and I will make an everlasting covenant with them. ♥ ♥ ♥ ♥ ♥ Thanks to the Divine Intervention of my Heavenly Father (Who came through when everything fell apart) My life bears witness of the miraculous Power of The Lord Jesus Christ! :D I have been delivered of multiple psychiatric drugs, LIES, and I've experienced supernatural healing in both my soul and body by The Power of The Holy Spirit of God! I have never been more FREE or happier in life than I am right now thanks to JESUS! This FREEDOM is for EVERYONE! God is surely on the move! Amen! :) I set out to college in 2003, majoring in psychology because I always wanted to heal with words. In spring of 2004, my world was shaken and forever changed with an unexpected "manic episode". That's not what it really was though. The TRUTH sets people free. The Bipolar diagnosis brought along a handful of hospitalizations, routine maintenance Cognitive Behavioral therapy, and medications. Because of the obstacles that followed, I found myself at the foot of The Cross, where true healing begins. Turns out this whole thing is a spiritual battle. Mental illnesses (and physical diseases, even cancer) are really demonic and can be cast out in the Name of Jesus if you are born again! It's called Deliverance Ministry. There is inner healing for the human soul provided for by The God of The Bible for all mankind. I have been truly liberated in such a great way by The Hand of God Himself. God can and WILL restore ANYTHING (Joel 2). My breakthrough did NOT come from a church building or a Pastor. My breakthrough came directly from The Throne Room when I sincerely sought The Face of God in my bedroom or "prayer closet." Updated testimony coming soon.

“If the Son therefore shall make you free, ye shall be free indeed.” John 8:36 KJV